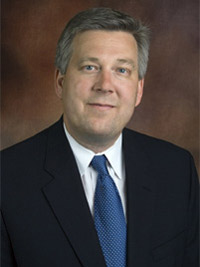 Dr. Bradford has served as Chairman of the Department of Surgery at Washington Regional Medical Center as well as a member of the Executive Committee. Dr. Bradford also served as an Associate Professor with the Department of Obstetrics and Gynecology for the University of Arkansas for Medical Sciences and taught resident physicians from 1996 to 2007. Dr. Bradford has published peer reviewed papers in the medical literature on the topic of laparoscopic or minimally invasive surgery.

Dr. Bradford has been married for 35 years to the former Anne Brown of Pine Bluff, Arkansas. They have five children ranging in age from 20 to 33 years old and six grandchildren. Dr. Bradford is an active member of the Church of Jesus Christ of Latter Day Saints and was recently released as President of the Springdale Arkansas Stake which has 10 congregations (and 3,500 members) in Northwest Arkansas. His hobbies include playing the piano, golf, and his children's numerous activities.